This image is from the websites of the municipalities of San Luis, Poptun, and Dolores in the Peten. Despite killings and intimation, Rigoberto Menchu continues her campaign for the presidency.

Poptun has a population of about 30,000 people. It is the base for Guatemala’s counter-insurgency jungle warfare special operations military elite, the Kaibiles. The name is derived from Kayb’il B’alam (Kaibil Balam), a Maya leader who led opposition to the forces of the Spanish conquistador Pedro de Alvarado and successfully evaded capture. During the civil war the Kaibiles were implicated in the massacre of civilians. 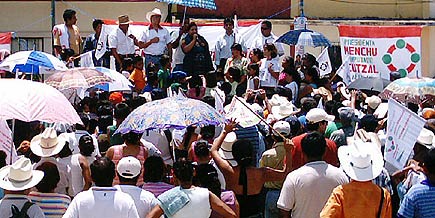