Processual and Postprocessual, Emic and Etic

These are words you might encounter if you read archaeological writing about Mesoamerica — or anywhere else for that matter. Since the meanings aren’t transparent, I asked a friend at Cornell for clarification. His answer follows.

An AP article announces the find by scuba divers of what may be Aztec offerings deep in a volcanic crater lake west of Mexico City. The snow-capped volcano lies at 13,800 feet above sea level.

Research is being led by Stanislaw Iwaniszewski of the National Institute of Anthropology and History of Mexico. Among the finds are lightning bolt-shaped scepters, copal incense, obsidian knives, and maguey cactus spines.

The lightning bolt scepter indicate offerings to the rain god Tlaloc (Chac is the Maya equivalent). Obsidan knives were traded through Mesoamerica. The cactus spines would have been used in blood letting.

Some of the materials are said to date to 100 BCE, which of course is more than a millennium before the appearance of the Aztecs (who headline the AP article).

Mayan Languages and the Origin of the Maya

I’ve reformatted and added a bit more information to my page about Mayan languages. It remains a confusing subject, since there are a large number of languages that are more often than not mostly mutually unintellible, yet at the same time “with the exception of Waxtek, these Mayan languages have been in contact with one another for many centuries and often grade into one another” (Robert J. Sharer, The Ancient Maya).

In general, the timeline probably looks like this. The Huastecans (or Waxtekans) split away from the other language groups in the fourth millennium BCE (they are now a Mexicanized group centered around Veracruz). Later in the same millennium, Yucatek split away from the others. Next to split were the Cholan-Tzeltalan languages, and thereafter things get so complicated that it really requires a Mayan specialist to sort it all out.

If Proto-Mayan dates to around the first quarter of the third millennium as linguistic reconstructions suggest (although this is far from certain), that would make it contemporaneous with predynastic Egypt, the earliest civilizations of Sumeria, the first year of the Jewish calendar (3760 BCE) and the appearance of phonetic writing in the West (ca. 3500 BCE). It would long predate the semi-legendary Xia dynasty, the “First Dynasty” of China.

Based on reconstructions of the Proto-Mayan vocabulary, it appears that Mayan probably originated in the Guatemalan highlands. Some of the areas in which Proto-Mayan is rich are words related to maize agriculture (“with separate words for generic maize, the green ear, the mature ear, the cob, maize flour, maize dough, the tortilla, a toasted maize drink, the rindstone, and three terms for the increasingly fine grindings of maize,” again according to Sharer), ashes, weaving, and writing (implying that the Maya developed some form of writing quite early on).

Other Proto-Mayan words further suggest how ancient many aspects of present-day Maya culture may be. They include words for hammocks, beans, chili peppers, sharpening stones, mats, sandals, combs, and other features still commonly encountered by travelers in the Maya world. 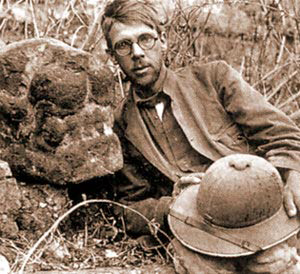 I’ve posted a look back at the work of two great Mayanists of the early and mid twentieth century, Sylvanus Morley (shown at left) and Eric Thompson. The piece is slightly long for my taste as a blog post, so I did it as a html page, here.

These guys invested a lot of energy and passion into researching the Maya. They came to dominate the field, and more or less enforced their point of view on it. That’s why it’s sad that they were so far wrong on so many things, and in some respects impeded the progress of work in the area.

The Great Collapse of the Classic Maya

For centuries travelers through the Maya world have encountered majestic ruins of a civilization that appears to have completely disappeared. Still today people ask what caused such a monumental collapse. While the relative importance of the various factors remains disputed, the general outlines of the collapse are now generally known. I’ve posted a new page on this topic here. 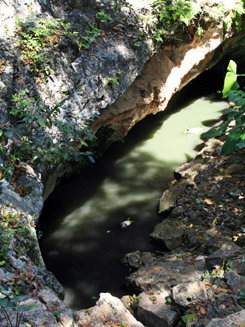 I’m starting to put up some images from my recent trip to the Yucatan. The image at left is a picture of the little spring that sustained the rebel community of the Talking Cross, the Maya band that nearly drove the non-Maya from the peninsula during the Caste War in the second half of the 19th century. (The spring is located in present-day Felipe Carrillo Puerto.) The image is part of a page I’ve put up on the Cult of the Talking Cross (the Talking Cross revolt figures in the novel that I’m currently completing).