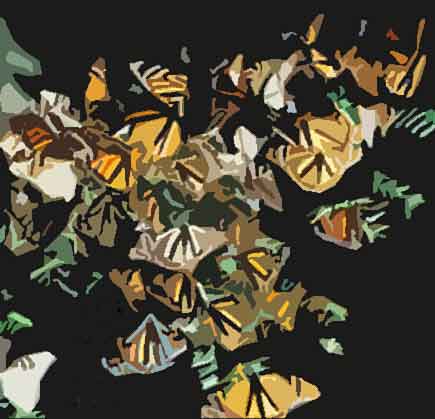 Mexican president Felipe Calderon visited the Sierra Chincua monarch butterfly reserve to announce a new $4.6 million program that will provide equipement and marketing support for the preserve, which is the winter refuge of monarch butterflies that migrate south from Mexico. Without a safe Mexican habitat, the butterflies would be endangered.

Calderon noted the significance of the butterflies to indigenous peoples:

The butterflies’ stay meant the essence of the dead, because the butterflies used to arrive around the time of the Day of the Dead and for the Otomí and Mazahua, they represented the spirit of the harvest, because the harvest ended when the Monarch butterfly arrived. These butterflies, which attract thousands of tourists, are regarded as one of Mexico’s natural wonders and this season, we hope to receive 230,000 tourists.

Calderon also announced that Mexico is working with the United Nations to have the monarch butterfly area recognized as a World Heritage Site.