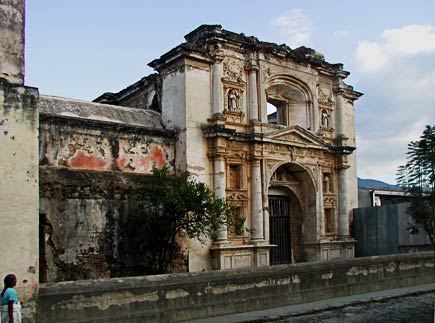 In 1677 three nuns arrived in Antigua from Peru. They had been sent to establish a Carmelite convent in the then Guatemalan capital. A few years later, building began on the church of Santa Teresa, where the foreign nuns and their new local sisters would be based; construction was completed in 1687. Unfortunately, thirty years later a major earthquake damaged the church. The nuns were terrified, and thereafter lived in thatched huts in the convent garden.

But that would not be the last earthquake to damage the building. Another hit in 1751. Then, in 1773, a catastrophic earthquake caused the building’s total destruction. These are the ruins that are visible today (which is remarkable, since most damaged buildings in Antigua are quickly rebuilt). Although the facade may appear fairly intact from the street view, the interior is in total ruins, and cluttered with rubble to this day.

The convent itself — which had been abandoned by the nuns in favor of the garden huts — actually faired considerably better than the church. It was used as a men’s prison well into the twentieth century