Juan Soriano at the Philadelphia Museum of Art 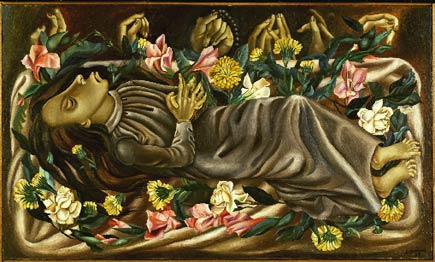 Juan Soriano (1920-2006) was born in Guadalajara, son of veterans of the Mexican revolution. Something of a prodigy, he developed his distinctive style after moving to Mexico City when he was fifteen.

Soriano painted this 1938 work shortly after seeing a Veracruz household whose front window displayed a dead child dressed like an angel, notifying the neighbors of the baby’s passing. Postmortem images of children were common in Mexican painting (and, later, photography) beginning in the colonial era. While this tradition originally developed in Renaissance Europe, it had a particular importance in Latin America. Mexican modernists Frida Kahlo, David Alfaro Siqueiros, and Julio Castellanos also created famous examples of this theme.

John Everett Millais’ Ophelia (1852) makes an interesting contrast. Both figures are surrounded by flowers, but the flowers in Soriano’s picture only point up the starkness of the figure by their contrast; Millais’ Ophelia seems to be drifting into a flowery world — she holds flowers in her hand and even her dress echoes floral patterns. Millais’ Ophelia holds her hands open to her fate; Soriano’s girl clinches her hands together. In her madness Ophelia stares vacantly skyward; the eyes of Soriano’s girl are pressed tightly shut. The difference reflect the styles of the moment, but they also suggest something of the artists’ temperaments. Soriano’s world is one in which the very edges of the canvas seem to press in on the image with a suffocating force. 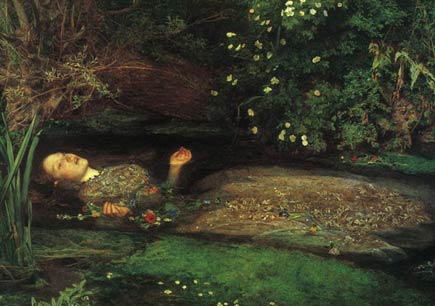 Fragile Demon: Juan Soriano in Mexico, 1935-1950 collects 16 early works by the artist. It runs through Sunday.