The classic Maya civilization reached its peak in the central region around the eighth century, when the great centers of Tikal, Copan, Palenque, and Cobah flourished, alongside a large number of lesser sites. But this glorious age was soon followed by a marked decline, with diminished populations, a reduction in building and art production, an increased obsession with warfare and military fortification, and ultimately the complete abandonment of the once-great centers.

Once considered a complete mystery — in part because it was not long ago that the classic Maya were themselves a mystery — the Great Collapse is now more a matter for argumentation regarding the relative importance of several factors, probably no one of which would in itself have been sufficient to bring about so extreme a downturn. These factors include:

The Maya were obsessed with war. The Annals of the Kaqchikels and the Popol Vuh speak of little but intertribal conflict among the highlanders, while the sixteen states of Yucatan were constantly battling with each other over boundaries and lineage honor.
— Michael D. Coe, The Maya

Despite ongoing disputes, the Maya centers of the classic period generally maintained a precarious diplomatic equilibrium through agreements and alliances. (The alliances apparently revolved around the two great states of Tikal and Kalakmul.) Around the end of the eighth century these alliances began to break down (the murals at Bonambak, for example, document a battle that occurred in 792), and warfare increased in frequency and intensity. Increased pressure from the militaristic Teotihuacan culture of the Valley of Mexico was likely a contributing factor. The stresses of warfare were thus the first factor, chronologically, contributing to the collapse.

What happened? A major factor was environmental degradation by people: deforestation, soil erosion and water management problems, all of which resulted in less food. Those problems were exacerbated by droughts, which may have been partly caused by humans themselves through deforestation. Chronic warfare made matters worse, as more and more people fought over less and less land and resources.
— Jared Diamond, the New York Times

In a way the Maya were victims of their success. The Maya region, according to Michael D. Coe's estimate, may have supported a population of some ten million people during the height of the classic period of the southern region, or about a third again as many as inhabit the area today. Such a large population was probably insupportable in the long run because of the difficulties of ensuring a steady water supply and because of the limits of the region's agricultural capacity.

The Maya mainly depended on collected water, as the region has a paucity of rivers and lakes. Such water was stored in natural caves, or cenotes, as well as in manmade reservoirs known as chultunob (singular: "chultun"). Supporting a population of millions with such a limited source of water would be challenging in any circumstance, but in a condition of lengthy drought it becomes unthinkable.

Tropical soils quickly become leached of their nutrients when exposed to the sun. Lowland Maya today practice slash-and-burn agriculture in which a plot (milpa) is cleared for growing corn or other crops for a short time (usually two years) and then allowed to return to its forested state over a period of years or decades. This system requires a delicate balance of population and resources. As the Maya population grew, it is almost inevitable that more and more land would be cleared, with an obvious strain on the region's ecosystem; this strain may itself have contributed to climate change.

The droughts sparked a chain of events that led to the demise of the Maya. "Sunny days, in and of themselves, don't kill people. But when people run out of food and water, they die."
— Richardson B. Gill, The Great Maya Droughts: Water, Life, and Death

Mounting evidence supports the theory that climate change played a crucial role in the demise of the classic Maya. Research in 2001 by University of Florida peleoclimatologists, consisting of sediment core analysis from Lake Punta Laguna (near the site of Cobah in the southern Yucatan) has shown that the region's generally wet conditions were intersperse with periods of dryness. These occurred around 250, 585, and 800 — the latter event enduring especially long, into the eleventh century. These dates correspond to period where little Maya development is observed in surviving arts and architecture. (Specifically the dates relate to the end of the Late Preclassic, the "hiatus" between the Early and Late Classic, and the Great Collapse.)

A 2003 report in Science magazine confirmed and extended these results. Researchers from the University of Potsdam, Germany, found that there were three large droughts occurring between 810 and 910. "While the Maya had learned to live with shorter droughts, the study indicates that a more subtle, long-term drying trend was ongoing during the collapse. The three specific droughts may have been what pushed the Mayan society over the edge."

According to [David] Webster, the failure to reoccupy Maya cities in the lowlands implies not only the failure of the subsistence system but also the belief system of the classic Maya. In the north, where cities were not abandoned, roles of rulers and the relations of citizens to rulers changed considerably, and city-states persisted.
— Norman Yoffee, Myths of the Archaic State

Climate change may have been the coup de grace to a society that was already deeply troubled. As the consequencies of drought accumulated and the healing rains failed to appear, the Maya priests would have resorted to more numerous and spectacular sacrifices to appease the gods.

When the great cities of the classic Maya were near starvation and it was clear that the priests' mojo had lost its efficacy, what would the people do? Here the Maya written record offers few clues. This is natural, for it was the priestly caste who were literate. It is conjectured that there was a great exodus from the central region north into the Yucatan, although little physical confirmation of this has been found.

Traveling the Maya world today, it is hard to relate the modern Maya with the gruesome practices of the ancient Maya overlords. I like to think that the modern Maya are the descendents of the ordinary people — not the rulers but those whose labor insulated the rulers from the impending crisis. I choose to believe that those people either rose up against the overlords, or simply drifted off when it was clear that there was no reason to remain. Illiterate, these men and women would have left no written record of their exodus. All that they would have left were what we see today: the empy shells of once mighty cities. 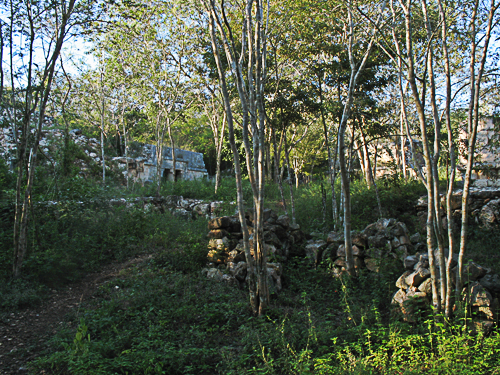